Was Lithia Spring Water Featured in the NY Times? Print

On September 13, 2014, the NY Times published an opinion article by Dr. Anna Fels as quoted: "LITHIUM has been known for its curative powers for centuries, if not millenniums. Lithia  Springs, Ga., for example, with its natural lithium-enriched water, appears to have been an ancient Native American sacred site. By the late 19th century Lithia Springs was a

Learn More Go To: "Should We all Take A Bit of Lithium" 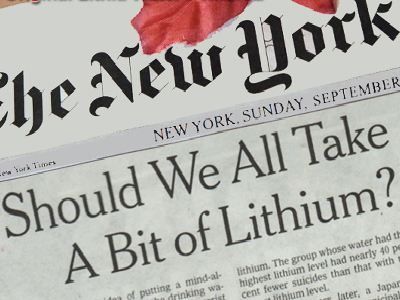 L
Lithia is the author of this solution article.

Did you find it helpful? Yes No

Send feedback
Sorry we couldn't be helpful. Help us improve this article with your feedback.